Transform a Roman Ruin into a Contemporary Art Museum 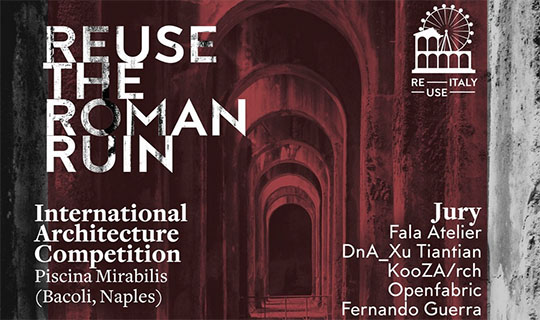 The second edition of the cultural project Reuse Italy promotes an international architecture competition on the reuse of Piscina Mirabilis, a Roman reservoir located in the countryside of Naples. The contest is powered by a partnership with ArchDaily, KooZA/rch, 120g, EX32, and with the official support of the Parco Archeologico dei Campi Flegrei, the Minicipality of Bacoli (Naples) and the FAI.

Piscina Mirabilis is a Roman reservoir built by Emperor Augustus in the 1st century AD, in order to feed with drinking water the headquarter of his western Mediterranean war fleet. It was dug out a tuff hill, and it is based on a regular grid of pillars and arcs, with vaulted ceilings.

The competition, open to architects, engineers and students, asks the participants to transform the ruin into a Contemporary Art Museum. The deadline is June 19th. It’s requested just one A1 sheet (59cmx84cm). The total prizes are 3500 Euro. The submitted projects will be displayed in an exhibition in a historical villa and the winners, in addition to receiving a prize, will be invited to explain their project to the citizenry.

The international Jury members are:

Is it possible to bring life back inside one of the most important reservoirs of the ancient world? The answer to this question is in the hands of the designers who will participate in this competition.