Revitalization of the Mill Race in the city of Košice 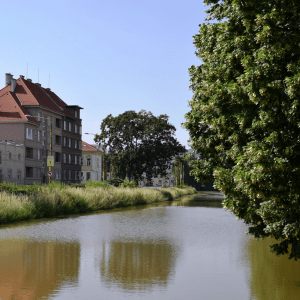 The Mill Race (Slovak: Mlynskýnáhon) is one of the natural branches of the River Hornád, which used to flow through the
wider centre of Košice. Until the
last century, the Mill Race was an
important urban element and
source of energy for three mills,
one of which was rebuilt into a
hydroelectric power plant.
In the 1960s, a decision was made
to abolish the watercourse in the
central part of the city and to place
a four-lane road in its original
riverbed, which had solved the
traffic problems of the dynamically
developing city. The northern and
southern parts of the stream were
preserved, but due to problematic
traffic and lack of interest of the
city management, both sections
gradually degraded.
At the end of the millennium, the
northern part underwent a partial
restoration of the backdrop type,
but this was carried out extremely
insensitively in relation to the
mode of operation of the Mill Race,
resulting in liquidation of the
distressed habitat in water and
on its banks.
3/31
2. Its present condition
The original bed of Mill Race is
located between the historical
centre of Košice and the city park.
It can be divided into three
sections:
– The Northern section with a
width of approximately
12 meters connecting Anička
Recreational Area with the wider
city centre which is called
the Mill Race.
The section is marked
in turquoise.
– The Middle section is piped.
The pipeline is located mainly
under a four-lane road that leads
through the city centre along
Štefánikova Street and Krivá
Street.
The section is marked with red
dots.
– The Southern section is formed
by the original riverbed with a
discharge into the River Hornád,
it is neglected and passes
through an industrial –
brownfield area. This section
is called the Mill Creek.
The section is marked in yellow.
II. Objectives of revitalization and landscape-urban
competition
The analysis of present state and potential of the locality, consultations with the professional and lay
public, and also the opinion of citizens on the future of the Mill Race, defined the goals we want
to achieve by revitalizing the neglected watercourse and its surroundings:
1. Biology
– Creating a living watercourse that will provide adequate conditions for the development
and maintenance of biodiversity in urban conditions.
– Ensuring safe nesting of birds, safe access to water for local animals and enabling the migration
of animals between water structures and the environment.
– Creating conditions for the development of aquatic vegetation, especially in water, as well
as in water and surrounding terrain interface. Design of structural modifications in accordance
with the above goals, detailing the species representation of aquatic macrophytes.
2. Urbanism
– Transformation of the area into an important urban leisure and recreational element.
– Creating the concept of pedestrian and bicycle connections along and across the watercourse.
– Creating a concept of public spaces with various functions.
– Involvement of the Millstream in the concept of urban green infrastructure.
3. Architecture
– Solution of elements of small architecture along the stream: piers, access to water, playgrounds,
furniture.
– Design of bridges.
– Architectural solution of public space in direct contact with water.
– Proposal for the solution of unused interblock spaces in the affected area.
6/31
4. Its operation
– The proposed solutions must take into account rational and economical maintenance
and operation of the watercourse, its banks and adjacent areas.
– When designing, it is necessary to respect that the maintenance must not adversely affect the
habitat especially during the growing season, e.g. by manipulating the water level and water flow
in the riverbed.
– Technical elements of the solution need to be integrated into the space so that not to interfere,
however, at the same time guarantee the full functionality of devices, the safety of the operator,
people and pets.
7/31
III. Competition information
1. Type of competition
The landscape-urban design competition is:
– project one,
– public one,
– non-anonymous one,
– declared for an unspecified number of participants,
– in the form of competitive dialogue with two workshops (3 and 5 in the following chapter).
2. Competition schedule
The schedule of competition can be seen in the following figure, the duration of individual steps is
indicative:
8/31
3. Jury, experts and representatives of organizations
The jury shall consist of:
a. Independent members : an urbanist, a landscape architect, an architect
b. Dependent members : a city representative, a biologist
c. Substitutes : an urbanist, a biologist, a landscape architect
Invited experts :
a. a water engineer
b. a traffic expert
c. a watercourse management representative
d. other experts as needed