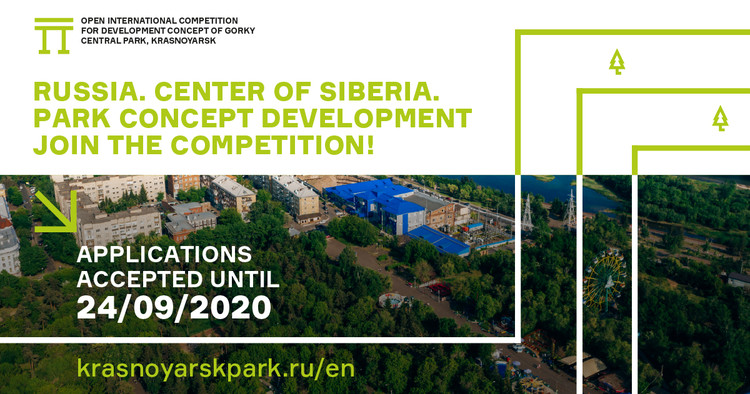 We are happy to announce that on August, 11 Open International Competition for development concept of Gorky Central Park started in Krasnoyarsk, Russia. Krasnoyarsk is one of Russian major million-person cities, famous as one of the leading cultural, educational, economic and industrial cities of Siberia. The city is located on the banks of the Yenisey river, one of the longest and mighty rivers in the world.
In Soviet times the park was considered one of the best in Siberia. The goal of the competition is to attract the world's best architects to the transformation of a landmark place. A large-scale international project will give a new impetus to the development not only of the park itself, but also of the city as a whole.
The competition is initiated by RUSAL, one of the world’s largest aluminum suppliers. The renovation of Gorky Central Park in Krasnoyarsk is to be one of several large-scale integrated public space development initiatives that RUSAL is supporting in the cities where it has a presence.
Application submission is open until September 24 at https://krasnoyarskpark.ru/en. The competition itself will have two stages and will end on December 15. The competition is open to Russian and foreign professional organizations in the field of the integrated development of territories and urban planning, architecture, design, elaboration of concepts for the development of public spaces, and master planning, provided that they operate in Russia.
Each team that makes it to the final stage will receive 900,000 rubles. In the final vote, the judges will pick the winner of the competition, who will receive an additional 1,800,000 rubles; the second place finalist will receive 1,000,000 rubles; and the third place finalist, 500,000 rubles.
The jury consists of officials from the Krasnoyarsk Region and Krasnoyarsk city administrations and experts on comprehensive territorial development, environmental protection, economics, and spatial planning. The head of the Jury is Alexander Uss, Governor of the Krasnoyarsk Region. The international curator of the competition is Peter Verdyck, Director of the Provincial Parks of the Antwerp Region, Belgium, International Curator of the Competition.
Competition is supported by the Administration of the Krasnoyarsk Region and the Administration of Krasnoyarsk. The Organizing Committee of the competition is the Agency for Strategic Development CENTER.
You can find precise information on the links below.
Official site of the competition: https://krasnoyarskpark.ru/en Photos of the press-conference here Live broadcast of the press-conference here
https://bustler.net/competitions/7553