LIVING upon the PLAY 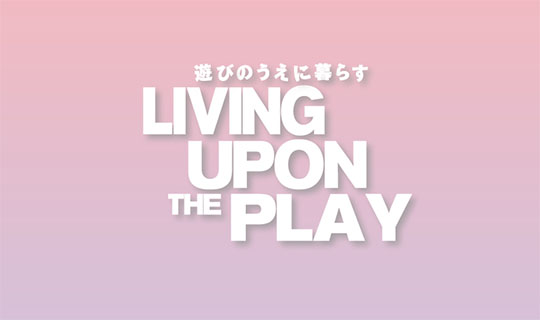 “Play” meaning in various ways, including playing like an infant, having fun with friends, indulging in drinks or gambling, taking breaks between work and study, having leeway to things, seeking beauty in literature and art isolated from the secular world, and giving space to machinery part connection. In any case, it is like a source to life, an act full of humanity contrary to pursuing functionality and rationality.

In Homo Ludens, written by Johan Huizinga, “Culture has occurred and developed as play in play,” “play has a significant meaning in life, and that it has an inevitable mission,” “nature has given us play with tension, joy, and fun.” Think of living in “Play” which may said to be the essence of human activities. “Play” could expand the possibilities in our lives and may give us hints on future life.

We look forward to your proposals.

To think more and more about play, strange feeling occurs that it underlies deeply in us human beings. Focusing on play in the modern society may be good or may be well to thinking of the unchanging play mankind has been doing for decades. Looking forward to seeing proposals of architecture or space approaching to the essence of play.

The boundaries between work and play are becoming limitlessly ambiguous. If more and more technology free humanity from routine work, it will likely become so more. When there is not a definite purpose, how does the conscious increase concentration toward happiness, pleasure, or anything fully interesting. What kind of space can be created by the mysterious attraction of play?

“Play” has the aspect of freedom, but on the other hand there are also “Play” that cannot be established without rules, such as baseball or soccer.
R. Caillois called the ambiguous nature of Play as Pidia (freedom) and Rudus (rule) and also found four “forms”, Mimicry (mimesis), Ilinx (vertigo), Agon (competition) and Alea (chance).
If you find the vague word “Play” difficult to handle, you can maybe refer to the analysis of such predecessors. Awaiting to see strict and serious “Play”.

Huizinga describes in Homo Ludens the turning of play and seriousness. Today, every play is crafted to be subtly useful, and it seems as though play-like seriousness is dominant. Huizinga focuses on the “spoil-sport”, which takes away the illusions of play, but now that it is filled with seriousness, what seems to be needed is a “shatter seriousness” to defeat it.

In 1988, a car advertisement which said “Ku-Neru-Asobu.” became popular in Japan. It was said that “Asobu” (Play) was added to the traditional Japanese rakugo story “KU-NERU-TOKORO-NI-SUMU-TOKORO” (places to eat, sleep and places to live).While the Emperor Showa was worried about the worsening of his condition at that time and mood of self-restraint, TV commercials with lines were considered inappropriate. The sound was erased and only letters remained. It may be an opportunity to doubt easy empathy to think about “Play” in a society that is again in the mood of voluntary self-restraint.

In the Analects of Confucius, “Aspire to the path of duty, follow the virtue, play in arts.” Since ancient times, enjoying the culture of Rikugei (Six Arts) has been a taste of true personality. While the development of civilization, the concept of “Play” in “Six arts”, has also changed. Creative ideas seem to be born with “Play” in peace of mind. Expecting to see creative interpretation of “Play” in the modern times.

Result: Prize-winners will be individually informed of the judging results.

Award Ceremony: Nov. 14th (Wed), 2018 (Award Ceremony will be held in Japan for the winners of the competition.)

Announcement: Public announcements will be made in the 2019 January issue of SHINKENCHIKU.