Idea Competition for the Urban Revitalization of the District 33 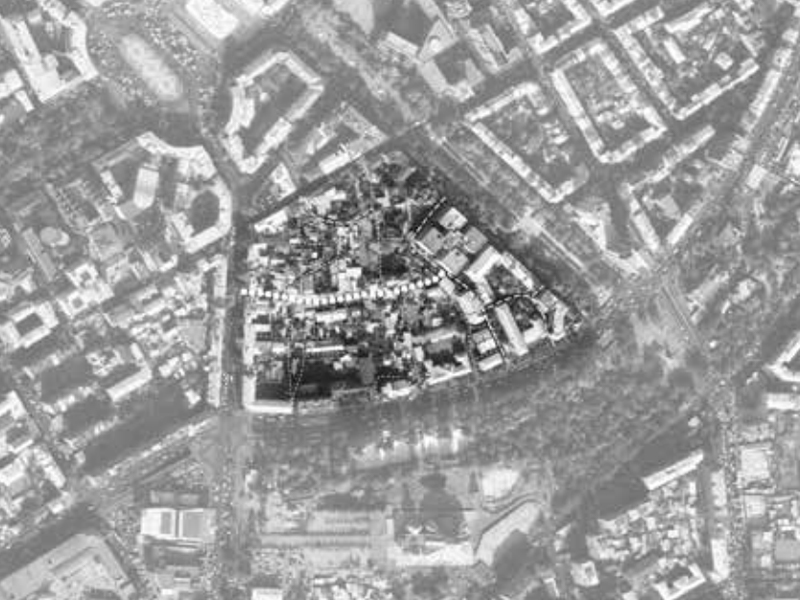 District 33, better known to the public as “Firdusi”, is one of the last surviving historical districts of Yerevan, which is located in the city center, next to the Republic Square. The square was formed as a paradigmatic symbol of Soviet urban development, and as a representative site for Soviet and post-Soviet power (formerly Lenin statue and currently Government buildings) and cultural heritage (History Museum and National Gallery). Standing in contrast to this environment, a district –i. e. Firdusi – was preserved next to it, which was formed in the late-18th century, and developed till the early 21th century.

Firdusi street and the District are unique traces of the city space from previous periods. This is one of the few streets in Yerevan that not only hasn’t changed its name over the centuries, or undergone radical transformations (both in urban development and sociol-cultural terms), but also remains a district, where people live their lives according to customs and traditions developed over many generations. The District contrasts with the city centre and becomes an alternative zone, where spontaneous architecture, one-or two-storey houses and orchards prevail.

By initiating this competition, the Committee for the Protection of Yerevan’s Heritage, aims to find the best alternative solution for the revitalization of the urban environment of the District.

The purpose of the conceptual proposals regarding the revitalization of the urban environment is: to point out economically, socially and environmentally feasible, and sustainable solutions through open and competitive processes at the urban development level, which will be based on the principle of conservation and re-evaluation of the historically-formed urban environment.

The proposals should suggest solutions to the four issues stated below:

Taking into account the aggressive real-estate development projects (North and Main Avenues, Old Yerevan project, etc.) of the last few decades, as well as the anticipated future projects (Kond, Noragyugh and etc.), the proposals should formulate a new standard for urban environment planning, facilitate the integration of different social groups and the transformation of their perceptions of the District.

Participants should pay special attention to the development of the urban environment, offering in particular:

The historically formed urban environment, having its unique, market formation pattern, needs to be rediscovered and reevaluated. By harmonious existence we mean a new environmental approach for Yerevan with a proper respectful approach to spontaneous developments, arising during the past two centuries, as well as creating prerequisites for future similar developments.

Being aware of the global and local environmental challenges, in their proposals the participants should develop systemic solutions aimed at reducing extra loading on engineering networks because of the new development of the District. At the same time, having a positive effect on the microclimate of the surrounding, minimizing the formation of urban heat islands in the District.

The proposal needs to be presented in a PDF format on minimum 2 maximum 3 sheets in 700x1000mm dimension, in 300 dpi resolution.

Each sheet needs to have an eight-dig- it number on the top right corner as an identification code for each applica- tion. Identification code should be in Tahoma Bold or in any other standard font with 18 pt.

Digital materials, with the identification code, should be named as aforemen- tioned: ID_DESIGN.PDF 01234567_DESIGN.PDF

The name of the additional files should be created in the same logic.

All final files for application should be in Adobe Acrobat format (PDF) and should not exceed 100 Mb altogether.

The final files need to be sent via one of these file sharing websites: WeTransfer, Dropbox, OneCloud and iCloud. Files from other sources will be considered as incomplete applications. The appli- cation packages need to be accessible for 3 days at the very least.

An email with a direct download link needs to be sent to [email protected] email address with the eight digits in the subject line. The Info Sheet needs to be attached to the email with direct link from one of the above mentioned file sharing websites in the email body.

Submitted proposal needs to consist the below mentioned drawings, which can be exceeded based on the nature of the proposal:

All textual information needs to be in English. Armenian versions or transla- tions are welcome but not an essential requirement.

No sign of a legal and/or informal entity, name(s) of the author(s) should be put on any proposal submitted. This info can appear on the Info Sheet only.

Competition is open for all interested individuals and teams from around the world without any restriction. There is no application fee for participation.