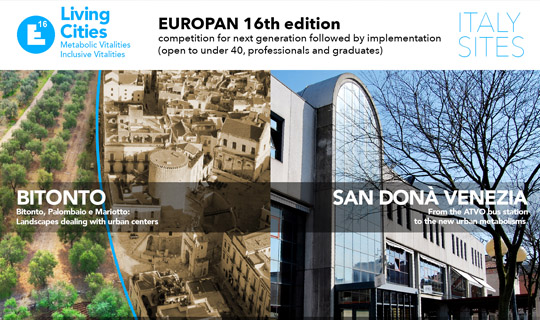 The Europan 16 competition topic focuses on living cities as a new paradigm, in which new kinds of synergies can be considered between the environmental, biological, social, economic, cultural and political dimensions. This paradigm leads us to think in terms of co-evolution and interactions, and to work with regenerative project dynamics, combining metabolic and inclusive vitalities.

In Italy, the cities of Bitonto and San Donà Venezia are looking for ideas to implement a strategic urban revitalization project and intend to start a process of implementation with the awarded teams. The goals for Bitonto is to connect the hamlets to the city through the new design of the squares and the landscape connction. The goals for San Donà venezia is to design new function on the former ATVO building near to the city center.

Bitonto, city of olive trees for the extensive olive groves that surround it and the important oil production. Located 19 km from Bari, the municipal area extends for over 170 km², from Alta Murgia, up to 2 km from the sea, and includes the hamlets of Palombaio and Mariotto, located to the southwest.
Palombaio (3500 inhabitants approx.), Is located about 7 km from Bitonto. It is arranged on the route that from Ruvo di Puglia constitutes an alternative route to the SP 231, more internal, up to connecting Palo del Colle, Bitetto, Bitritto and the first municipalities of the metropolitan area through the SP 22.
Mariotto (approx.2,300 inhabitants) is located about 11 km from Bitonto and in a slightly higher position (240 m a.s.l.). It is characterized as the last settlement outpost of urban consistency before the Murgian plateau. The Bitonto territory borders on ten municipalities: Giovinazzo and Bari to the north, Modugno to the east, followed clockwise to the south with the municipalities of Bitetto, Palo del Colle, Binetto, Toritto, Altamura, to the west with Ruvo di Puglia and Terlizzi.
San Donà di Piave, a city in the Eastern Veneto region, rises on the banks of the Piave river. It represents the third most populous municipality of the Metropolitan City of Venice and the ninth municipality of the Veneto Region by number of inhabitants. The territory extends for about 79 square kilometers, along the axis of the Piave river and between the Sile and Livenza rivers. San Donà shares its limits with Noventa di Piave, Salgareda, Cessalto, Chiarano, Ceggia, Torre di Mosto, Eraclea, Jesolo, Musile di Piave, Fossalta di Piave. The city center of San Donà di Piave is 16 km from the coast, 6 km from the Venice lagoon, 70 km from the Dolomites. The Piave river connects 3 Unesco heritage sites: the Dolomites, the Prosecco hills of Conegliano and Valdobbiadene, Venice and its lagoon.