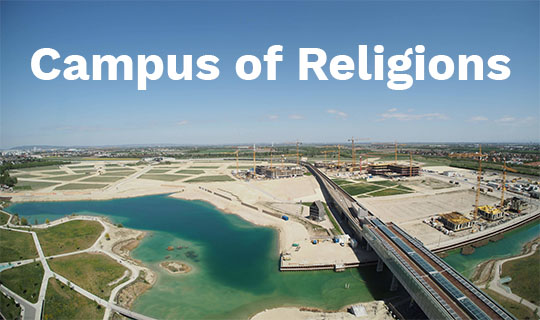 The ”Campus of the Religions”, an interfaith center and international model project, will play a special role in Vienna’s social life. The competition launched on April 17th aims at finding architectural solutions for the buildings for worship/religious services of the eight participating communities, for the University College of Christian Churches for Teacher Education KPH, shared and open spaces. The Campus construction site covers approx. 10,000 m² near aspern’s lakeside.

The association “Campus of the Religions” driving the project comprises eight world religions represented by communities in Austria: Buddhists, Catholics, Protestants, Muslims, as well as the New Apostolic, Sikh, Greek-Oriental and Jewish communities.

The open, EU-wide, one-step realization competition, which also includes an ideas competition and negotiated procedure for general planning, was launched on April 17th. Submission deadline: June 22nd for planning materials, or June 29th for architectural models. The decision of the jury, chaired by Prof. Arch. Mag. Arch. Boris Podrecca, will be published in July.