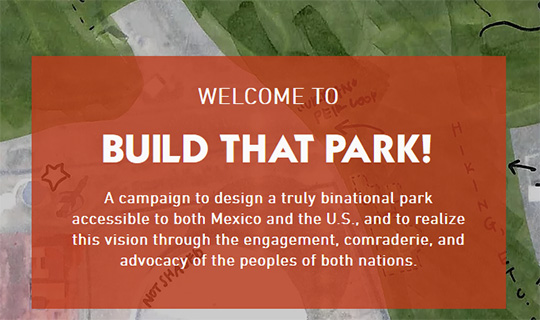 We are at a delicate stage in our relationship with our ally to the south, Mexico. The destructive and divisive security wall that stands at this time has the potential to overwhelm an important but fragile friendship between the ordinary citizens of the United States and Mexico. Especially in these charged times, it is critical to make a visionary statement that says, “we remain friends and allies”. This fence is a symbol that projects mistrust and disrespect for the ordinary citizens from both countries.

The current configuration transmits an erroneous message that must be countered with an equally powerful message. It is especially at this time in our histories that we must celebrate our friendship, in part to remind the citizens of both countries that we share more than just a border – we share a region, an economy, a culture and a future. International Friendship Park is a tangible celebration of this message.

The site is located at the far western border between the United States and Mexico at a small but historically important site called Friendship Park, adjacent to the dramatic backdrop of the Pacific Ocean to the west, a large and beautiful estuary to the north, and the vibrant community of Playas, Tijuana to the south.

We will present the full design for this space on August 18, 2021 and will invite input from many voices through open design competitions, charrettes, and outreach. International Friendship Park will allow for citizens of both countries to enter into a binational space that is created from equal amounts of land from each nation. The United States will contribute a portion of Border Field State Park, an improved and previously graded mesa overlooking the largest continuous estuary in California. Mexico will contribute exactly that same amount of land, part of which would include the beautiful historic bullring, which would become a space for conferences, music and other large group functions. It would also become a powerful forum from which to speak on the nature of borders, and the crucial need of allies. The estuary forms a natural barrier on the northern edge of this park – perhaps no wall is needed at this location in favor of passive methods of boundary vigilance. And, perhaps the Mexican authorities will see no reason to construct a border on the southern edge of this park. Instead, we will design a retractable structure that will be raised and lowered when needed. A pedestrian only border crossing will be located at International Friendship Park. Tijuana,

Mexico has direct access to this bi-national space as it occurs adjacent to a thriving community with shops, restaurants and housing. All of these uses and more will be within the park, effectively creating a bi-national city. As can be imagined, citizens from both sides of the border will feel powerful emotions as they stand on neutral and common soil. The catalyst for this project is a pedestrian bridge spanning the Rio Grande in Texas. Upon this bridge, citizens of both the United States and Mexico can cross both the river and the international boundary. An interesting and absolutely common phenomenon is occurring in this crossing that lays both the conceptual basis and legal groundwork for this proposal. When one wishes to cross the border into Mexico, one is well into sovereign Mexican soil before one comes upon the checkpoint. The same condition exists when one travels from Mexico into the United States. This is an understandable configuration, given the challenges of terrain and watershed preservation.

The idea that citizens from both countries are together, without constraints, in an intermediate zone between two sovereign nations had a galvanizing effect on us. It sets a precedent that may allow a different way of considering the border region that allows and encourages multiple entry points for many different uses, and might support zones for San Diego with tiered access. We envision eventual shared cities along the border that flourish on the strength and spirit of both countries. This proposal is offered because of the need for renewed faith and trust between the countries of the United States and Mexico. It is exactly at this low ebb in our mutual history that a project should be offered that expresses respect and cooperation for the citizens of both countries.
The Challenge

We will collect visionary ideas and designs of International Friendship Park over the span of the next 10 months. We will collect stories and testimonials from stakeholders with shared visions of a space that exemplifies friendship and trust. 4 distinct design competitions, open to professionals and students alike, and from all over the world, will influence the overall design of the vision over time. This Visionary Plan will remind us all that the best security between countries is friendship and cooperation. International Friendship Park will become a reality with your help.

The Competition
In 4 parts

For each of the 4 competitions there will be a $500 first place award, and two honorable mentions at $250 each. In addition, the winners will be included in a competition journal to be published at the completion of all four competitions.

The International Pier
Imagine a bi-national pier extending out into the Pacific Ocean from the westernmost edge of the proposed bi-national park. We invite your visions in this first of four design competitions that explore International Friendship Park at the US Mexican border at the Pacific Ocean. This 1,954 mile (3,145 km) border terminates at this location, a place of great beauty and great potential. There are no restrictions to the length, width, or character of this pier. It may be made of any material and be of any character. It will celebrate cooperation and can encompass any use.

Courtyard for Free Speech
The courtyard is 200’ x 200’, and is centered on the international border line. It may be any distance from the sea that the designers choose. The walls may be of any height, of any material, and as porous or solid as the designer thinks appropriate. There are no programmatic requirements but any use is allowed.

The Boardwalk
There currently exists a wonderful seaside boardwalk just inside the Mexican border. This boardwalk will continue to exist within the boundaries of International Friendship Park. Adjacent to this boardwalk are vibrant restaurants, businesses, residences and shops. All of these uses will remain within the new bi-national park. The challenge it to extend this seaside walkway to the northern edge of International Friendship Park.

The Historic Bullring
This existing structure is no longer used for the purpose of bullfighting. The structure itself is quite beautiful and the challenge is to assume a use that allows large group gatherings, concerts, lectures etc. The base can be ringed with uses on the exterior as well. The structure may be carved, covered, an otherwise modified.