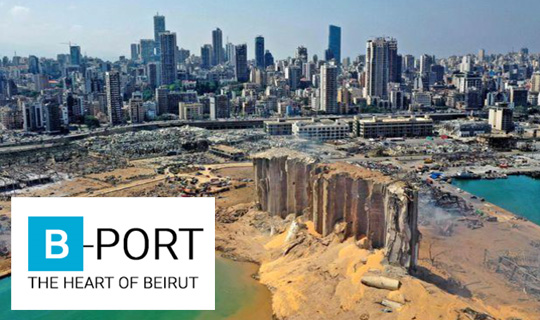 In this competition, students from all over the world are invited to rethink the future port of Beirut that will be rebuilt and invested under F.D.B.O.T (Finance, Design, Built, Operate, and transfer); the Port administration and the ministry of public work and transportation need to set their requirements and condition list that would shape the path of the future; hence, the winners of this competition will have the chance to be part of setting the requirements with the Lebanese authorities and therefore part of rebuilding the port.

August 4, 2020, 18:08:18 EEST marked the Zero hour of one of the biggest non-nuclear explosions in history with the force of a 3.5 magnitude earthquake – and is believed to have been fueled by 2,750 tons of ammonium nitrate stored in warehouse-12 at the port.

Aside from the mass destruction caused by this explosion, at least 204 people were killed (with an additional 3 missing) and 6,500 were injured. Above all, Beirut-the capital that was spawned by its harbor as the focal Middle Eastern node point that connected many continents has been left with a dead Port.

Participants are challenged to not only think of the new port as a piece of architecture or an urban master plan but raising the question of how to exploit the very expensive lands for the benefit of fostering the economy and commerce as well as restoring the indispensable storage area and the essential port-functions: the mission is to bring back the port’s competitive aptness in its context in order to further engage in the world trading markets.

The port needs to operate flawlessly with the seven main operational areas: the container terminal, the empty container zone, the general/conventional cargo zone, the silos building, the free zone, the passenger terminal, and the existing port administration with its parking. Aside from the mandatory, students have the freedom to propose the alleged supplementary program that requires recreational areas, cultural areas, commercial and socio-economic areas, memorial areas, transportation, etc.

Any architecture student can participate in the competition, regardless of their nationality. Likewise, people from other disciplines can also participate, such as urban planning students, economy/sociology students. Under no circumstances may jurors, the organization or persons directly related to the jury of the finals to participate in this competition.

There will be 1st Price Lebanese Winner and 1st Price international winner, along with 2nd and 3rd place and 20 special mentions. Winning projects will participate in rebuilding the port of Beirut under F.D.B.O.T along with financial prices, certificates, and international mentions in the biggest architectural platforms in the world.