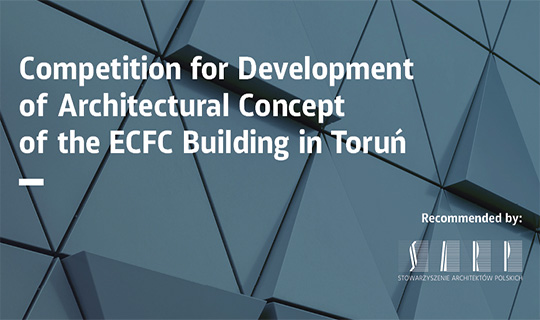 On Sunday, February 28, the European Film Center CAMERIMAGE (ECFC) and the Association of Polish Architects (SARP) announced an international competition for architectural concept of the European Film Center CAMERIMAGE building in Toruń. Due to the international nature of the competition and the uniqueness of the planned architectural project realization, please include information about it in your architectural magazine. Our dream is for the information about this project to reach the widest possible group of architects who we hope will enter the competition and present their ideas. More information can be found on the websites of the organizer of the ECFC competition (www.ecfcamerimage.pl) and the Camerimage Film Festival (www.camerimage.pl).

The construction of the ECFC seat, scheduled for 2021-2025, is the second largest – after the Polish History Museum – construction investment project in the field of culture in Poland. The cost of construction is PLN 600 million, of which PLN 400 million is to come from central government funds provided for in the Long-term Development Program, and PLN 200 million from the budget of the City of Toruń.

The subject of the competition announced on the last day of February is the architectural concept of the ECFC seat in Toruń along with the development of the area. The organizers expect designers to present a modern, extraordinary object, fully reflecting in its architectural expression the unfettered imagination of the authors, just as the art of film can be unpredictable and authentic. The building and its development should meet the expectations of users with a highly developed sense of aesthetics. The organizers hope that the largest architectural studios in the world will take part in this design competition, drawn by the attractiveness of the design scope, the award and the investment value. A post-competition exhibition of submitted works is also planned to present architects’ ideas to a wide audience.

The competition is conducted in a limited, two-phase competition procedure and is addressed to the international community of architects. Its results are planned to be announced at the end of July 2021. The exact schedule of the competition, its regulations and other documents needed to participate can be found on the competition’s website: competition.ecfcamerimage.pl. The jury will evaluate the submitted works according to equivalent criteria, such as, among others, the attractiveness of the proposed architectural solutions, functional and utility efficiency and the quality of the proposed rooms in the ECFC building in terms of their functionality and architectural expression.